FOR MORE THAN THREE YEARS, my screenwriting partner and I have been developing an independent feature film that predominantly features African-American and Persian characters. Despite having actor Navid Negahban — best known for his role as Abu Nazir, the enigmatic al-Qaeda leader he played for two seasons on Showtime’s Emmy-winning original series, Homeland — attached as a producer and star of the project, ours is still considered a risky property.

Hollywood is a risk-averse business, and I have come to understand firsthand some of the difficulties faced by filmmakers as studio finance folks constantly run their scenarios, determining what counts as a sane investment in a decidedly precarious industry. Never mind the uniqueness of the story. They want their return on investment. They need to cast an A-list star to get it.

Which makes the idea of casting a big-screen, big-budget biopic of revered 13th-century Persian Muslim poet and scholar Rumi a risky notion for Hollywood. And yet I, like many, understand the rage behind the social media hashtag #RumiWasntWhite, which went viral after a story broke in the Guardian about plans for a forthcoming film by Gladiator writer David Franzoni and producer Stephen Joel Brown, who have Leonardo DiCaprio at the top of their wish list to play the poet. Robert Downey Jr. is also on among their dream cast to play Rumi’s spiritual mentor, Shams of Tabriz.

Their intent is to create a story that will “challenge the stereotypical portrayal of Muslim characters in western cinema,” said Franzoni in the Guardian, seemingly deaf to the irony of doing so by casting white guys as brown, Muslim, historical figures.

While garnering a great showing at the US box office is always a defense for such a casting move, I also know how important international revenues are to a project. In December, the Los Angeles Times reported that international movie ticket sales accounted for about 73 percent of box office receipts in 2015 — three times the revenue in the United States. With an increasingly diverse global marketplace, casting people of color could pose a very attractive variable to the bottom line.

Diverse casts in films, as in television, draw audiences and make money. Numerous studies support that — including the 2016 Hollywood Diversity Report published by the Bunche Center for African American Studies — just as most everything coming out of ShondaLand proves. The rise of such directors as Ava DuVernay (Selma) and Ryan Coogler (Creed), for instance, are due in large part to their unique perspectives in storytelling. They cast black leads in stories that challenged the traditional narratives of the American experience — and audiences came. Make no mistake, however, diversity goes beyond black or African-American stories, which is usually the focus of such discussions — it’s about inclusion. It’s why we applauded the TV Academy, and its choice to honor people of color in all the leading acting categories for the first time — ever.

It’s why we cheered at the Tony Awards, with people of color dominating the top four acting slots in best musical performance categories. It is why the continuously sold-out Hamilton is not only a Broadway musical phenomenon — taking home 11 awards of its history-making 16 nominations (just missing the award-winning record of 12 wins set by The Producers in 2001) — but is an example of the artistic zeitgeist reflecting the allure of our cultural diversity.

Conversely, critics have widely lampooned Momentum Pictures’s most recent release, Septembers of Shiraz, a story based on the novel by Dalia Sofer about a wealthy Iranian-Jewish family’s journey as the 1979 revolution breaks out. It stars non-Iranian actors — Academy Award winner Adrien Brody and Oscar nominee Salma Hayek — with the notable exception of third-billed Shohreh Aghdashloo, another Academy-nominated actor. The Los Angeles Times calls the film a “ho-hum ‘Argo’ wannabe,” while the film review site, RogerEbert.com, lambasts the work as “monotonous and repetitious,” with the Guardian noting the film’s “sole joy is in trying to figure out which of its leads is overacting most. Is it Adrien Brody, making crazy-face as the Persian-Jewish jeweller incarcerated by the Revolutionary Guard in 1979 Tehran? Or is it Salma Hayek and her ‘where in the world is this?’ accent …”

Imagine how much better the film could be if those involved had an actual sense of the history they were portraying — or at least carry it off with a more believable accent, as is the case with the all-Persian voice-over cast of 1979 Revolution: Black Friday — an immersive interactive video game from developer Navid Khonsari, who was a child at the time of the historic uprising. (Argo’s Farshad Farahat and Navid Negahban are among the talents attached to the project, which was cultivated with the support of the Sundance Institute’s New Frontier Story Lab in 2014.)

Whitewashed films don’t fool anybody — as we’ve seen with the response to Gods of Egypt and Exodus: Gods and Kings, and the hubbub over the casting of Scarlett Johansson as a Japanese character in Ghost in the Shell, of Mexican actor Gael García Bernal as Iranian-Canadian journalist Maziar Bahari in Rosewater, and of Afro-Latina Zoe Saldana in the title role of a Nina Simone biopic in black face, prosthetic nose, and afro wigs. These films tend to draw more outcry from audiences for racial insensitivity than support at the box office.

The #RumiWasntWhite uproar is yet another post–#OscarsSoWhite call-to-action for Hollywood studios, producers, casting directors, writers, et al. Misappropriating the identity of an iconic character like Rumi does not challenge stereotypes, it reinforces them. It is not even good “color blind” casting. It is once again denying audiences an accurate representation of culture and history.

Even for audiences who wouldn’t claim to be looking for multicultural representations on-screen, they are seeking out stories and characters that feel new, fresh, and different. They want a unique experience in storytelling behind the scenes and in front of the camera.

There is value in all of our stories, and as people of color, we want to see ourselves in our own narratives — and, sure, stunt cast some Oscar-winning or A-list white folks in the mix (à la Sylvester Stallone to Michael B. Jordan in Creed). Among the top leading Persian actors in Hollywood, none have ever opened a big-budget movie on their name alone — granted, few are ever given the chance. So let DiCaprio fill in a supporting role, and let a brown man breathe life into Rumi. Let a brown man bring his own culture to life on-screen.

Perhaps someone like Negahban, who, since coming to Hollywood’s attention in the award-winning short, Boundaries, in 2000, has had his glut of terrorists and bad guys, while drawing critical praise for a plethora of other roles, such as the “Kamistani” Jamot on Fox’s hit series, 24, and his most recent turn in Baba Joon, which was Israel’s submission for the Academy Awards in 2016 for Best Foreign Film.

Negahban, whom GQ recently described as “very dashing, with an old-fashioned matinee-idol air to him […] the closest thing we have to the late Omar Sharif” — and who counts former Israeli President Shimon Peres and US President Barack Obama among his fans — has been featured in two Oscar-nominated projects in the past two years: Clint Eastwood’s American Sniper in 2015 and the 2016 dramatic short, Day One. If there was anyone who could take on the role of Rumi, it is Navid Negahban: he’s Persian, he’s Muslim, and he can grow his own Rumi-esque beard in a matter of days.

Here are a few more suggestions: Shaun Toub, another beloved Homeland villain, who has amassed notable recognition with critically lauded performances in Iron Man and the Oscar-winning Crash; David Diaan, also a Homeland alum who worked alongside Negahban in Baba Joon; Ali Saam, best known for his work in Argo; and Amir Khalighi, known for Drones and Almost Broadway, who, coincidentally, made his theatrical directorial debut a few years ago with Rumination, a story based on the works of Rumi (okay, that was almost too easy).

Need a younger Rumi? There’s Argo alum Bobby Naderi, who will be starring in the 2017 Fox television miniseries, Prison Break; Nicholas Guilak (Saving Jessica Lynch), a multi-credited film and TV character actor; and Dominic Rains, who took home the 2016 Tribeca Film Festival’s Best Actor award for his compassionate turn as an Afghani journalist transplanted to rural California in The Fixer. Rains also recently wowed audiences at the LA Film Festival with his stellar performance as the lead in the independent feature, Chee and T.

White men are not the world’s heroes. And yet, it’s like the African proverb says: The hunter will always be the hero until the lion can tell his own story. Only in the case with this proposed Rumi casting, the hunter not only gets to tell the story — he also gets to play the lion. Here is a chance for a studio to do better, be bolder, and cast bravely. To ignore this is an insult to the artists who can do the work — and to the audience.

Janice Rhoshalle Littlejohn is a senior editor at the Los Angles Review of Books, author, and filmmaker. Her independent feature, Lovers in Their Right Mind, a romantic drama about an African-American woman and Iranian immigrant, is in development. Follow her on Twitter @JaniceRhoshalle. 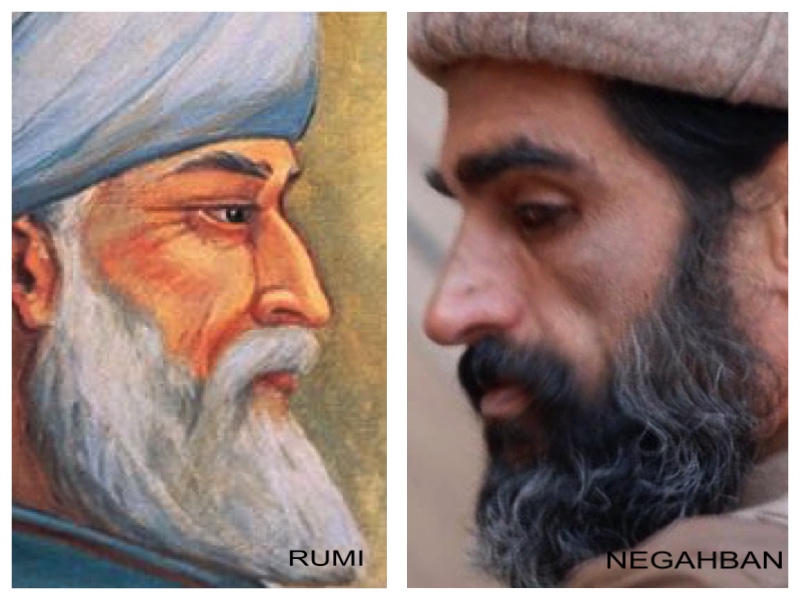