SOME WRITERS LAY undisputed claim to a territory, geographical and otherwise, and thus discourage rivals from trespassing. Early 20th-century Alexandria, Egypt, belongs to Cavafy. Dublin, Ireland, of course, is Joyce’s; as Albany, New York, is William Kennedy’s. The coastal region of Liguria in Northwestern Italy is inarguably Eugenio Montale’s proprietary realm; its sea and sunlight are his. In his first collection, the commonsensically titled Poems (1955), Robert Conquest included “A Problem,” six eight-line stanzas opening with “Liguria tingles with peculiar light. / The sea and sky exchange their various blues.” What follows reads, at first, like a linguistically sophisticated travel brochure: sun, rocks, dry weeds, the sea. Then Conquest opens the aperture wider and launches his challenge to Montale: “And here / Man might, as well as anywhere, / Combine his landscapes and philosophies.” The next stanza and a half return to the painterly mode, followed by this:

Where wood and sea and sky and hill
Give static broad simplicities, its course
At once more complex and more simple
Appears to thought as an example,
Like the complex, simple movement of great verse.

And there we have, in its oxymoronic purity, a poetic credo. Verse is “complex, simple,” which might be interpreted as antimodernist defiance — metrically sophisticated, rhymed, rationally comprehensible, with no wooing of incoherence. In short, poetry that nonpoets might enjoy as they once did Tennyson and Frost. Did Conquest have Montale in mind when writing “A Problem”? For all I know, he never heard of the Italian master. The point is that from the start Conquest was a confident cosmopolitan, as a historian ought to be. Among his recurrent themes are love and sex, science and poetry. The verse — Conquest’s preferred usage — in Collected Poems, edited by his widow Elizabeth Conquest, some 60 years of it, is vast and various in every sense. Conquest is that rare sort of poet who might take anything as his subject matter. Without being shrill or resorting to bumper sticker message-mongering, Conquest is a poet of the people, or at least of that portion who read poems for pleasure. In The Dragons of Expectation: Reality and Delusion in the Course of History (2004), he writes:

Nothing human is alien to Conquest, who died in 2015 at age 98. He is at home in the world, as poets seldom are. He writes poems for intelligent readers who enjoy formal verse and humor that ranges from the ribald to the wittily rarefied, and who share his interest in particulars. Conquest will be remembered principally as the man who, even before Aleksandr Solzhenitsyn, exposed the Soviet Union as a murderous tyranny in such volumes as The Great Terror: Stalin’s Purge of the Thirties (1968) and The Harvest of Sorrow: Soviet Collectivization and the Terror-Famine (1986). Politics and history, of course, show up with some regularity in his poetry, often in a form that resembles light verse. Here is a stanza from “Garland for a Propagandist”:

When Yezhov got it in the neck
(In highly literal fashion)
Beria came at Stalin’s beck
To lay a lesser lash on;
I swore our labour camps were few,
And places folk grew fat in;
I guessed that Trotsky died of flu
And colic raged at Katyn.

When Conquest reviewed the 1974 appearance in English of Solzhenitsyn’s Gulag Archipelago (1973), he judged it “a truly exceptional work: for in it literature transcends history, without distorting it.” Conquest does something similar. Readers who don’t otherwise read poetry have memorized what must be his best-known poem, written in a form reflexively derided by sophisticates — the limerick — and too often written by those with nothing to say:

There was a great Marxist called Lenin
Who did two or three million men in.
That’s a lot to have done in
But where he did one in
That grand Marxist Stalin did ten in.

That’s The Great Terror in five lines, 35 words. But Conquest doesn’t dwell exclusively in a poetic ghetto of politics and history. One of the pleasures of his verse is its range of form and subject. Some poets harvest a very narrow field, too often the fenced-in self. Conquest’s poems resemble the late Turner Cassity’s in their appetite for the world and all it contains, pleasurable and otherwise, and in their satirical bite. His poems know things. In 1956, Conquest edited the influential poetry anthology New Lines, informally aligning the poets who came to be called The Movement: Philip Larkin, Kingsley Amis, D. J. Enright, Thom Gunn, Elizabeth Jennings, and himself. In his introduction, Conquest dismisses the “diffuse and sentimental verbiage or hollow technical pirouettes” of the era’s “New Apocalypse” poets in the United Kingdom, such as J. F. Hendry and Vernon Watkins, and endorses a “refusal to abandon a rational structure.” In “Whenever,” Conquest endorses Wyndham Lewis’s call for “a tongue that naked goes / Without more fuss than Dryden’s or Defoe’s.”

One of Conquest’s richest, most satisfying poems is “The Idea of Virginia,” 34 four-line stanzas that encapsulate the history of the state and, by implication, the United States. “It lay in the minds of poets,” the poem begins, which Conquest characteristically clarifies: “But the land was also real: rivers, meads, mountains.” Conquest has no pretensions to being a nature poet, but he starts with an Edenic natural world: “Deer and pumas ranged its high plains. Beavers / Toiled in its streams. Bluebird and mocking-bird, / Blue jay, redbird and quail filled branches and air.” He retells the familiar story of John Smith, Powhatan, and Pocahontas without pontificating. The idea of Virginia grows naturally out of English thought:

Conquest recalls the Civil War, much of it fought in Virginia and still being fought today: “Slavery at least was gone. Over yet one more century / As the wounds heal up, the flaws start slowly to fade.” In Virginia, Conquest sees what Lincoln at Gettysburg called “a new birth of freedom.” The poem concludes with its opening words:

The Idea, never fulfilled, was never abandoned;
The free order only approaches its goal.
The land lived on imperfect in city and forest,
Its Form half-remembered; as it lay in the minds of poets.

This reader finds what we might think of as Conquest’s meditative/historical poems his most satisfying. Let’s remember that he was English by birth but American by choice. “Coming Across” is a 10-page travelogue about a westbound trip along Interstate 10, from Florida to Southern California, from sea to shining sea. He passes through “Unintricate Texas, / Huge, glittering Houston, / Then the Alamo draws us, / Bowie and Crockett!” I suspect Conquest is subverting Whitman at his own continent-embracing game. Once he reaches the Pacific, he looks back at the political and engineering triumph of an interstate highway: “A structure of reason, / A realized concept, / A white stamp of wanting, / A symbol of something.” Other readers may prefer the poems in the 2012 volume Blokelore & Blokesongs about the fictitious Fred Faraday, a lusty fellow and unreconstructed man’s man, who offers something to amuse and/or offend almost everyone, as in the closing stanza of “Feckless Fred”:

Chaps may, what’s more, fall madly in
Love, as Fred once did.
His mind short-circuited by gin,
Committed by his id.

In love and sex as in history and politics, Robert Conquest is ever the realist, never the idealist. Softer hearts will call him cynical, mercenary, reactionary. They are mistaken. His six-page poem “Getting On” (published in 2010, the year Conquest turned 93) is one of the best I know about aging. In it, the poet, lover, and historian merge:

Stroll through those earlier sheaves of verse,
As soon an old harvest-hope recurs
And throbbing with the pulse of years
Through the cleared mist Love re-appears
The sort of love that holds distilled
Those sweeter essences that yield
Flowers, lions, meteors — everything
About which one might dream or sing.

Patrick Kurp is a writer living in Houston and the author of the literary blog Anecdotal Evidence. 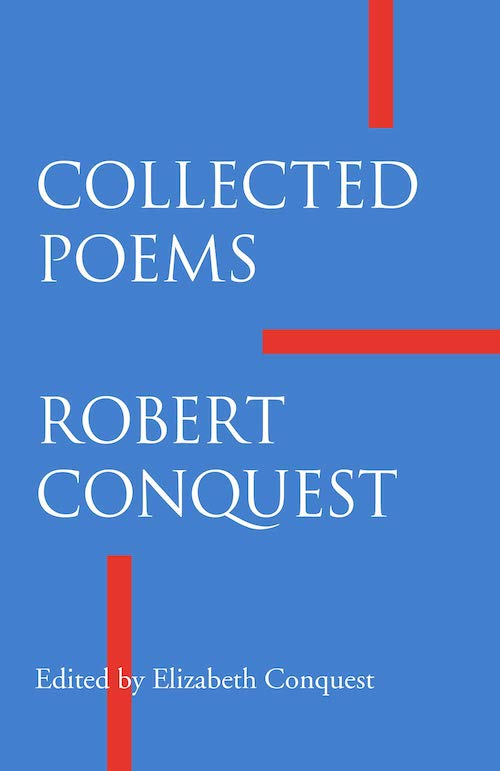