IN THE SEARCHER, Tana French stakes out new territory: a rural Irish setting quite different from the urban and suburban Ireland of her previous works, and a central character who is an American, while her previous characters have been native Irish. French is the author of six novels in her “Dublin Murder Squad” police procedural series (the first two of which were recently filmed as The Dublin Murders, a TV series produced by the BBC and Starz), as well as a previous stand-alone novel, The Witch Elm.

French portrays a rich Irish landscape at the edges of a townland in the west of the country: “The sky, dappled in subtle gradations of gray, goes on forever; so do the fields, coded in shades of green by their different uses, divided up by sprawling hedges, dry-stone walls and the odd narrow back road. Away to the north, a line of low mountains rolls along the horizon.” In the novel’s first few pages, we’re introduced to the main character, Cal, a former cop who has relocated (alone) from Chicago to rural Ireland, as well as the major themes of the story: the labor involved in the renovation of an old house, the task that Cal has set himself in his self-imposed exile, and Cal’s life as an outcast, exemplified in his relation to a flock of rooks nesting in a tree in his yard.

The book opens with Cal noticing that “the rooks have got hold of something,” a small animal, still alive, that they are ripping apart. Shortly after, when Cal is working in the house, “a sleek mid-sized rook landed on the sill of the open window, yelled what was obviously an insult, and then flapped off laughing.” Cal tries to make friends with them, offering them scraps and tempting them to come closer, but instead they “cuss him to hell and back again,” jeer, shout, bicker among themselves, scream abuse, and react to his approaches with “a collective eye-roll.”

Throughout the book, the birds are anthropomorphized as a microcosm of the local natives and yet are also ruthless in the totally natural manner of the animal kingdom. The birds are literally the original residents (Cal says to himself that “the rooks have been here a lot longer than he has”), and their manner as almost-human predators and scavengers exemplifies both the natural and the social environment in which Cal finds himself. Through a loquacious and opinionated neighbor, he finds his way gradually into a group of local farmers, all male, who meet in the nearest pub, where they argue, laugh, and insult one another. And, as with the rooks, there is a potential violence always present among at least some of them, awaiting some unpredictable provocation.

In the early chapters, Cal’s orbit, having left his daughter and ex-wife behind in the United States, is relentlessly male; his only female contact is Noreen, the keeper of the local shop. There is an earnest masculinity in this section of the novel present in the close attention Cal pays to the natural environment. The plot develops in the slow rhythm of Cal’s work on the old house, evoked as much in its muscular effort as in the progress of the work: “[H]e doesn’t mind the aches. They satisfy him; along with the blisters and thickening calluses, they’re solid, earned proof of what his life is now.”

He gradually becomes part of the community though remains an anomaly as a Yank who’s not a tourist. Cal forms an initially tenuous connection to an angry and almost feral local youth, Trey, a relationship that deepens as Cal persuades the kid to help him work on an old desk just as he has tried to tempt the rooks to befriend him, leaving out bits of food for the birds. When Trey does accept his friendship, at least in a limited way, Cal offers the kid lessons in the skills necessary for the renovation of the house, as well as shooting and hunting.

But Trey has an ulterior motive, having discovered the American’s background as a cop: to get Cal to look for a missing brother, Brendan. When Cal initially refuses, Trey’s attempts to persuade him are comically violent: egging the house, flattening Cal’s tires, and so on. When Cal does finally agree, he works very slowly, first contacting the feckless cops in the local station of the Garda, the Irish police force, in the nearest town, then posing a few cautious questions to Brendan’s few friends. Regardless of Cal’s caution, his pursuit of Brendan’s trail puts him at odds with villains that French keeps offstage and faceless for much of the novel, making them equivalent to the aliens that some men in the local pub suspect of mutilating their sheep. There is, at the climax, a powerful reveal where we discover that the evil in which Cal has become enmeshed emanates from something closer to home than those aliens, not distant villains but a lurking and pervasive presence.

Cal’s anxiety during his investigation of Brendan’s disappearance is reminiscent of the emotional toll of his former job, something he had hoped to leave behind. His former life as a cop has trailed him: “[I]t just took a little while to sniff him out, all these miles away, and track him down.” But even harder to leave behind is his sense of responsibility for strangers, and the anxiety that comes along with it:

He can’t shake the feeling that some emergency is heading towards him, someone is in danger, and he needs to keep all his wits about him to have a chance of fixing things. He reminds himself that anyone else’s danger isn’t his problem, but it doesn’t take.

The theme, as well as the title, of French’s novel suggests The Searchers, the 1956 John Ford/John Wayne Western, and indeed there are explicit references to Westerns and cowboys in this Irish frontier. But this searcher is quite different from John Wayne’s character, who in the movie is searching for his niece. Cal is seeking to rescue Brendan, a young man for whom his mother seems reluctant to search, from an unseen “tribe” that Cal thinks has abducted the boy; a gang that is indeed a threat, but not in the straightforward way that Cal imagines. The actual kidnappers are closer to home than those in John Ford’s film: Cal’s pursuit only takes him as far as the nearest town and ultimately to the hills surrounding his new home.

Yet another connection to Westerns is Cal’s repeated mention of a moral code, one that guided his previous life as a Chicago cop and upon which he intends to rely even now, though his certainty about the code has begun to waver. That sort of code is, of course, a common element of the less cynical versions of noir fiction as well (see, for instance, Raymond Chandler’s hero, “neither tarnished nor afraid”). French’s blending of classic noir, the police procedural (once Cal begins his search), and rural noir fiction (across the spectrum from Jim Thompson to Daniel Woodrell) is a new direction in her work.

And French tweaks the reader’s prejudices about her characters. Cal and the reader abruptly make a discovery about Trey that shifts the relevant comparison to a John Wayne film from The Searchers to True Grit. French’s abrupt undermining of gender stereotypes continues in later chapters with an episode of extreme violence perpetrated by a woman, and with the emergence of Lena, Noreen’s widowed sister and a possible match for Cal, though her uncompromising independence puts their relationship on a different footing. French manages to portray the attitudes and prejudices of Cal’s maleness without judgment, while ultimately also demonstrating the necessity of his acceptance of the limits of his moral code and his distance from the violence, both natural and social, that predates his entrance into what he had thought would be his retreat from urban strife.

The Searcher blends qualities of French’s best novels, the first and third of her “Dublin Murder Squad” police procedurals, In the Woods and Faithful Place. In the Woods blends folklore, history, and contemporary life, and has an emotional power grounded in local incidents and local people’s lives. Faithful Place concentrates on The Liberties, a working-class neighborhood in Dublin, and the claustrophobic, casually cruel family home from which Detective Frank Mackey fled years earlier. In The Searcher, French expands that closeness and cruelty from a family to a community, and in so doing tells a tale that blends the history and the contemporary reality of a relentlessly palpable village crossroads.

Glenn Harper is the former editor of Sculpture magazine and reviews crime fiction at internationalnoir.blogspot.com. 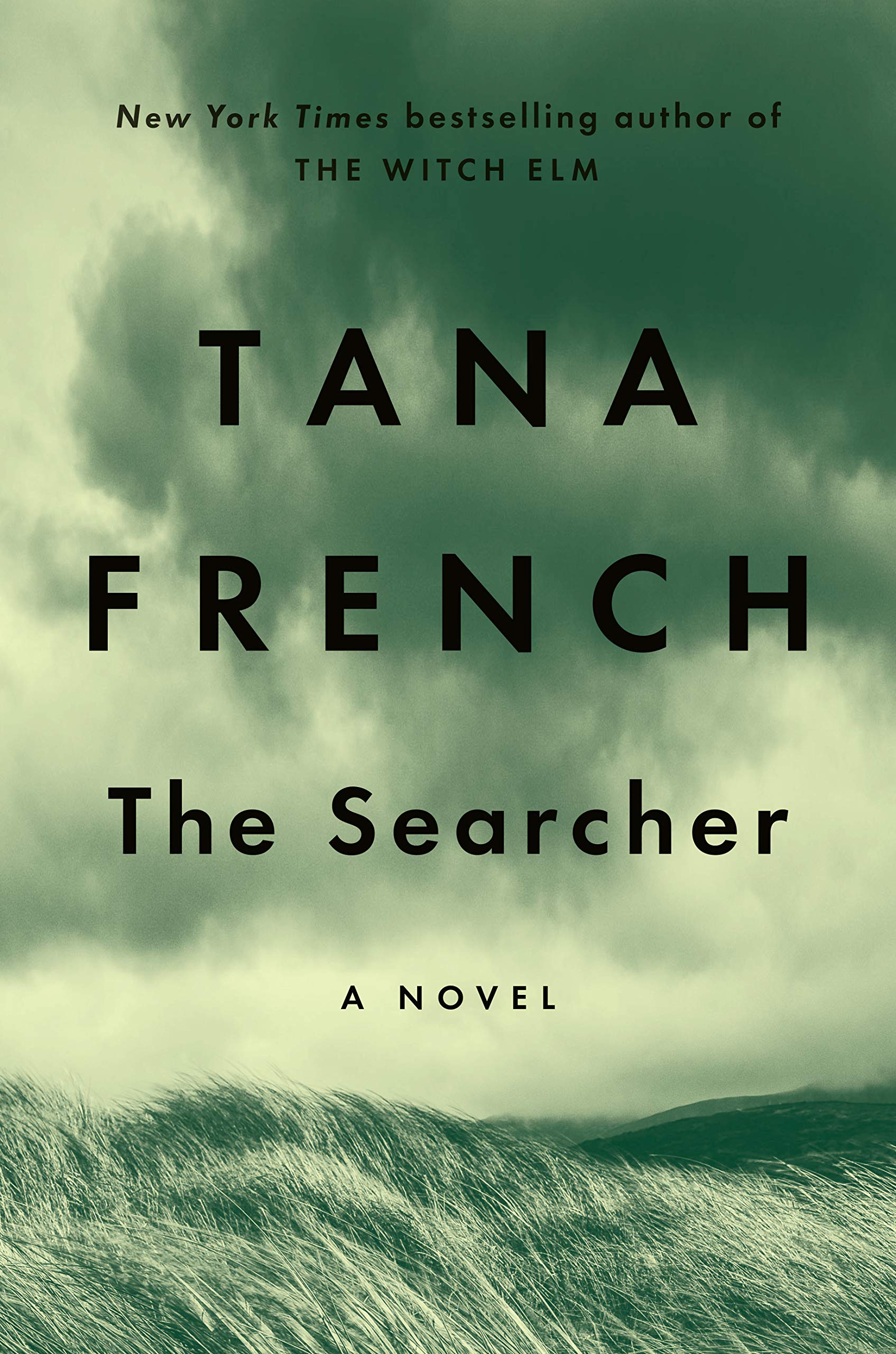