MYSTERY, LYRIC INTENSITY, STRANGENESS, ANIMISM: no poet embodied these qualities more than did the early twentieth-century Austrian poet Georg Trakl. Poor, drug-addicted from an early age, and possibly involved in an incestuous union with his sister Margarete, Trakl enlisted in the army in World War I and participated in the bloody battle of Grodek on the Eastern Front. Ludwig Wittgenstein, who admired Trakl above all his contemporaries and became his anonymous donor, was stationed nearby. Upon learning that the poet, whom he had never met, was deeply depressed, Wittgenstein traveled to Grodek, only to learn that Trakl had taken his life three-days earlier. He was twenty-seven years old.

The Trakl most Anglophone readers know is a kind of Deep Image poet. As translated by James Wright and Robert Bly in their Twenty Poems of Georg Trakl (Sixties Press, 1961), Trakl was seen as the quintessential poète maudit in the Rimbaud tradition — a poet who wrote highly suggestive nature poems like “My Heart at Evening”:

Toward evening you hear the cry of the bats.
Two black horses bound in the pasture,
The red maple rustles,
The walker along the road sees ahead the small tavern.
Nuts and young wine taste delicious,
Delicious to stagger drunk into the darkening woods.
Village bells, painful to hear, echo through the black fir branches,
Dew forms on the face.

“The images,” Bly wrote in his introduction to the 1961 edition, “have a mysterious connection with each other. The rhythm is slow and heavy, like the mood of someone in a dream.” And Wright adds: “A single red maple leaf in a poem by Trakl is an inexhaustibly rich and wonderful thing, simply because he has had the patience to look at it.”

Bly, Wright — and, later, Galway Kinnell, Louise Glück, and Charles Wright: their condensed visionary poetics owed much to this version of Trakl in its use of concrete, sensuous imagery, “simple” syntax (short declarative sentences in the present tense), and a slow stately free verse in which the line is equivalent to the grammatical unit. Against this background, Christian Hawkey’s brilliant Ventrakl, which puts Trakl’s tragic life squarely into the poetic equation, testifies to the enormous change that has come over lyric poetry in the twenty-first century. The poet’s voice, as Hawkey remarks in his erudite preface (itself a kind of prose poem) “is less a vehicle for ‘self-presence’ than a void, a blank space at the site of intersection.” Indeed, Ventrakl, with its play on ventricle, is conceived as a “collaboration” with a tutelary spirit, not so much a new “translation” of Trakl’s poems (Hawkey himself knew no German when he began the project) as a “ghostly reanimation” of the poet’s textual presence. Accordingly, translation gives way to transposition, to citational graft and recycling.

A storehouse of techniques, Ventrakl is the product of its author’s total immersion in what we might call Trakliana — everything he could put his hands on that was written by or about his subject, as well as family photographs, some of them enlarged and digitized beyond recognition (culminating in the portrait of Hawkey himself seated in a coffee bar, wearing, so to speak, Trakl’s face). The inclusion of photographs in a book of poems or fiction is no longer much of a novelty — think of W. G. Sebald’s novels, or Susan Howe’s The Midnight — but Hawkey’s meditation, especially on the studio portrait of Trakl aged two (dressed and coiffed as a little girl, as was then the custom) is moving in its groping after meaning: its assumption that maybe this is really a photograph of Trakl’s sister, followed by the recognition that it is just an ordinary period photograph of a little boy:

It’s your sister, I thought at first. And you answered: It’s me. There was and is no detail that pricks, no wound (as Barthes would say) in this image. But the image of you dressed as a girl stunned me. I became lost … in my own response to the image … . the Other of your self.

That Other haunts Hawkey’s elaborate restaging of the Trakl drama. The younger poet’s inability to pin down the “real” Trakl is especially powerful in the repeated dialogues — almost interviews — to which Hawkey’s narrator subjects the dead poet. For example, in one such exchange, Hawkey asks Trakl how the figure of the stranger functions in his poems:

One has to walk out of one’s self one’s city, into the outskirts, to meet him, her.

Your poems, and perhaps poetic language, record this journey?

Think instead of a large, yellow, breathing sponge.

You mean as “the image” of the stranger, the one standing before you,
Facing you?

I repeat. Think of a large, wet, breathing yellow sponge. Have you ever held one up to your ear?

No. But I was thinking about your poetics of decomposition, and how permeab-

Even a wet kitchen sponge. Squeeze it a little. The noise is deafening.

Are sponges known for the noise they make? The “poetics of decomposition” — Hawkey’s phrase rather than Trakl’s — produces some remarkable lyrics: for example, five arresting centos made from the color words which are so prominent in Trakl’s work (red, yellow, blue, black, and white). Such passages as “Red laughter in the dark shade of the chestnuts. / Snow gently drifts from a red cloud,” followed by eight more “red” lines in “Redtrakl,” create a sense of claustrophobia and enclosure rather different from Trakl’s own imagist discourse. Elsewhere, Hawkey invents a technique he calls “homographonic” (on the model of homophonic) translation, deriving “toads” and “waffles” from tödlichen Waffen (deadly arms) or “Herbs. Lichen. Licking” from “herbstlichen” (autumnal). The mock list of items seriatim, as in “Notes Toward a Translation of Facial Expression” or “Reasons why the Blind Hover in Front or Float Glass Windows” appears repeatedly, as do definition poems like “Hole” or the Umdichtung (“a poem woven around another”). Single-line lyric, prose meditation, ekphrasis, documentary fragment: these alternate in complex patterns of articulation.

What saves Ventrakl from being a mere tour de force — an endlessly clever parodic version of specific Trakl source texts — is the book’s increasing sense of bewilderment: as the sequence moves toward its crescendo — an actual translation of Trakl’s great war poem “Grodek,” about the very battle that was to kill him — the reader comes to realize that Hawkey cannot, in the end, identify with Trakl, or even seriously understand him. Too much time has elapsed between the beginning of the twentieth century and that of our own, between the tragic drama of World War and the more farcical than tragic condition of our own “permanent technology-driven warfare” (see Preface). Trakl’s mysterious and opaque lyricism thus becomes the occasion for contemporary speculation on a great Modernist lyric corpus, as appealing as it is out of date in our own self-conscious age. The information overload of Google discourse allows us a startling amount of access, however compromised, to a “foreign” poet; Hawkey can even obtain machine translations, scrambled and distorted as they are, of Trakl’s lyrics. But the more information the author of Ventrakl has about his subject, the less he really knows him. The very words of the poems, so direct and unambiguous in their familiar Deep Image versions, become opaque: the German Abend (evening) yields “ends” and “bends” in English, and the chamber of the heart turns into a wall not to be scaled.

Indeed, the visionary dream image, so loved by earlier translators like Wright and Bly, is replaced by a drive toward cognition and reproduction — a drive impressive in its refusal to come to conclusion or even to a point of rest. There is no overarching vision, Hawkey’s poem suggests, only those moments when the “ant-light” briefly clears the glass we look through. And even that’s not right: “Never through,” we read, “but around.” 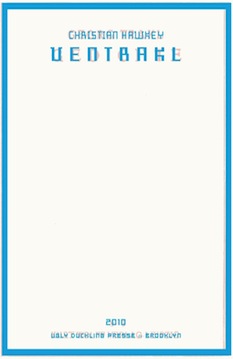