I’M SCARED OF SKIING. Stick me in a tube, put me down a manmade hill covered in fake snow, and I’ll be happy. But even that I haven’t done in years.

It doesn’t help to read an article about avalanches in The New York Times with sentences like:

Moving, roiling snow turns into something closer to liquid, thick like lava. But when it stops, it instantly freezes solid. Saugstad’s pinwheeling body would freeze into whatever position it was in the moment the snow stopped.

Terrifying. More than that, it offers a new understanding of states of matter. What does that mean about molecules? What else is so unpredictable around me?

I realize the mountainsides maintained for the Olympics aren’t at risk of avalanches. But you see the snow. I see it. And it’s something I’ll think about as I marvel at the feats of the Olympians. My son won’t think about it. Hell, most of the world won’t think about it. The skiing will be enough. But my brain seems interested, always, in holding the light and the dark, the busy and the lagging, the daring and the meek.

This isn’t unusual for poets. We figure out what’s odd in the way we see the world and we exploit it. We try to teach our students to seek out the way they see things differently. We talk about connotations, memories. We turn to metaphor. I like to think about Theory of Mind. As Robert Sapolsky explains it, “the first time you realize that somebody has different thoughts from you.” It happens, on average, between ages three and five years old.

My son is about to turn three. This means, I think, that he doesn’t know yet that when we see Dora come on the screen, we’re not both filled with delight. In turn, he thinks his emotions are my emotions. How incredible? To view life as this shared experience? And mostly, I do relay his own feelings back to him. If he gets hurt, I make a sad face. If he gets mad, I say, “I’m mad, too!” If he laughs, I laugh along with him.

It’s hard to imagine that next year he will begin to understand our discreteness. He will understand there is room to wonder at what I might think, how I might react, what my motives might be. Is that where doubt comes from? Fear and shame? All in this developmental leap. I can’t help but wonder if there could be a version of humanity somewhere that doesn’t ever make that leap, that grows and matures always thinking we are one.

I know it’s not the dreamy existence I’m making it out to be. I’m thinking of it as a mother protecting her son, keeping him close. But really, a lack of Theory of Mind leads to a form of isolation.

I started talking about this to explain how we teach young writers to write remarkably, to write at least one line worth a remark, because then they will know how to write more of them. I think it’s about uniqueness in perspective. That I see a sick fox and want to write about a fox-god. That they see one and what? What next? What next?

I wonder about uniqueness when I think about Olympians. How do coaches teach and encourage it in these young adults? What do they say so their students understand it in themselves? How about when they first start coaching them as children, before there’s any quantifiable evidence of their ability? The fast time, the consistent mark. Just a hunch.

(Maybe it’s not so different as the young, aspiring poet — an exhilarating feeling from the action, a few impressed peers, and a few impressed adults. Maybe that’s enough to push anyone in any direction.)

When a young Olympian thinks of adulthood, what do they think? For a second I’m jealous of the bright light that accompanies that vision. Then I think past the competition. To what? Picabo Street’s ChapStick commercial? Dara Torres who still swam on the Olympic team at age 41 in 2007? If you’re good at shooting or dressage, you could compete until your 70s. (Maybe there’s time yet for us all to be Olympians.) But that’s not my point — that a life could be filled with sports stardom. I’m acknowledging that every future you point a 12 year old toward has its excitement and its dread.

The beautiful shot of the mountains behind the overview of the scores is killing me right now. I think about all the sex they’re having in the Olympic Village. I’m very happy for them. And their mothers, and their Theory of Mind, and their childhoods well behind them, and their lack of fear at the slopes of mountains.

Sarah Blake lives outside of Philadelphia with her husband and son. 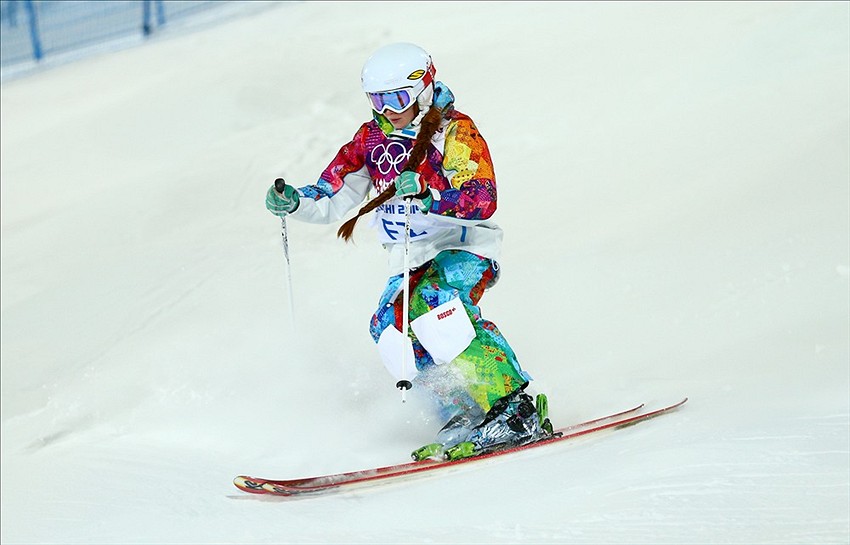 We Can Be Heroes: The Winter Poetry Olympics Part I: On Skiing and Theory of Mind