THE FATHER OF 20th-century anthropology in America came — fittingly enough — from another time and another place. Born in the middle of Europe, and in the middle of the 1800s, Franz Boas was the son of assimilated German Jews. Paths for acceptance were not unknown to him, but after receiving a doctorate in physics, he grew impatient and forged a different path. Suddenly he was less interested, Charles King tells the reader, in building mathematical models of how the world changed than in understanding how our own changing conditions altered the way we made sense of it. What if one tried to grasp how a quite different culture offered a different modality for navigating the world? Could an outsider come to understand that process and those people, and then communicate this understanding to others? Gods of the Upper Air explores how Boas and his extraordinary students sought to do just that.

In the late 1800s, Boas set off for the Arctic. Other Arctic explorers had looked to test themselves in unusual and extreme conditions; Boas was interested in those for whom such conditions were normal: indigenous peoples who found the landscape no more extreme than he had found the University of Kiel, his alma mater. Interviewing Inuit in the region, being introduced to their languages and their social organizations, opened for him a different way of thinking about how particular cultures develop in specific environments. It was also a form of Herzensbildung, an education of the heart, King notes: “Changing his place in the world had changed his perspective on it.”

Arctic expeditions belonged to the genre of 19th-century explorations of the exotic, but Boas’s cut against their grain. In the last decades of the 1800s, Western countries were competing to build their empires in far-flung regions, and there was more than a little interest in the peoples being displaced. Ultimately, this was a vested interest legitimating the superiority of those doing the displacing. Theories of evolution were used to justify imperial ambitions, and anthropologists served up accounts of primitive cultures left far behind in the march to modernity. Boas worked alongside these fellow anthropologists at museums of natural history, world’s fairs, and universities, but his views were different. He saw each culture as having its own integrity, its own ways of providing meaning and direction to the people who comprised it. As he put it early on, “the main object of ethnological collections should be the dissemination of the fact that civilization is not something absolute, but that it is relative, and that our ideas and conceptions are true only so far as our civilization goes.” King underscores that Boas, and later his students, were asking Americans “to suspend their belief in their own greatness.”

And what students Boas came to have! Papa Franz, as he was often called, built the anthropology department at Columbia University, where, as he noted, his best graduate students were women. This was quite unusual, though King sheds little light on why this turned out to be the case. What King does so very well is explain the complex ideas of these brilliant and unconventional women, while situating them within the scholarship (and political debates) of their times and exploring their complicated lives with sympathy. Gods of the Upper Air is gracefully written, and it succeeds beautifully both as intellectual history and group biography.

King begins with the most famous of the Boas students, the fascinating Margaret Mead. Determined to follow her passions (and they were many), Mead opened herself to understanding the passions of people who lived in circumstances very different from her own. As a serious young girl, she had showed how “rectitude could be its own form of rebellion”; now she was determined to show her fellow Americans alternatives to conventional ways of understanding sex, gender, and identity. Her early book Coming of Age in Samoa (1928) made her a public intellectual to be reckoned with, and she remained prolific in writing for a general audience even as she spent long stretches doing fieldwork in the South Pacific. A profound concern for Mead was the problem of translation, especially acute in the field. “You had to use the imperfect language of your own society,” as King glosses her approach, “to try to make sense of another.”

For Boas student Ella Cara Deloria, the work of translation went in many directions. A Native American who grew up in a prominent family on the Standing Rock reservation, Deloria made her way to Oberlin College and then to Teachers College. She was working with children in Sioux Falls when Boas asked her for help in doing research on Native American languages. Cutting through the misconceptions of earlier ethnographers, she became a key player in the effort to understand how Dakota people, for example, actually spoke. She made sure that the people she described weren’t seen as relics of an earlier time — at least not any more than those in Morningside Heights. Their language and ways of life were still evolving.

Languages revealed “patterns of culture,” to use a phrase made famous by Ruth Benedict, the most academic of the Boas students. Benedict was an editor, an administrator, and an interlocutor for many of the researchers who were trying to stay in touch with Papa Franz while they did their fieldwork. She was also Mead’s lover and lifelong friend, and the two wrote powerfully about their special connection. Benedict was more professorial than Mead and made her way up the ladder in the department at Columbia — no easy task for a woman in the middle of the 20th century. Her contributions, however, weren’t confined to academia. As World War II was coming to a close, she directed her energies toward understanding Japanese culture in order to help prevent misconceptions in the wake of that awful trauma.

Boas student Zora Neale Hurston delved deep into ethnography while also finding her voice as a novelist. Gods of the Upper Air deals most powerfully with race and gender, not in the abstract, but in their concrete effect on the life of Hurston. An African American, Hurston had friends and patrons associated with the Harlem Renaissance, as well as ties with Barnard and Columbia, but her restless spirit could be confined by no single school. She wanted to avoid what she called the “gods of the pigeon-holes,” and instead worked toward a cosmopolitan perspective — like the “gods of the upper air,” the phrase King uses for his title. Having grown up in a majority black town in Florida, she returned to the South for fieldwork. With support from the Guggenheim Foundation, she also spent a transformational time in the Caribbean, especially in Haiti. Hurston lived the Boasian creed: “[J]ettison the search for universal laws and open your eyes to the people standing, singing, and chanting right before you.” She returned from her Haitian trip with scholarly research in one hand and a novel destined to become a classic, in the other: Their Eyes Were Watching God. Hers, she said, was a “literary science.”

Hurston’s fame would come only posthumously. Boas died in 1942, and by the end of the war Hurston had fallen out of touch with the circle of his other students. They were active in fighting racism at home and abroad, but most never experienced its painful, ordinary persistence in their own lives as Hurston did. Jim Crow, professional challenges, and Hurston’s own demons made it hard for her to find work. She sank into poverty and died in obscurity in 1960.

Gods of the Upper Air is a magisterial group biography, but also a narrative account of a way of thinking, an approach to living in a world with many cultures. Like Louis Menand’s The Metaphysical Club, it is clear and confident in explicating ideas; like Lisa Cohen’s All We Know: Three Lives, it brings us close to the intimate lives of remarkable women who resisted convention while carving out spaces for creativity.

Some contemporary theorists of anthropology have determined that Boas and his students didn’t always go far enough or were not always consistent in their open-mindedness. What a surprise! We should be wary of our parochial self-confidence vis-à-vis the past, just as we would be well served to amplify some of the intellectual and personal legacies of these explorers in our own insular times. By giving up the idea that history leads just to us, we may yet find ways of living more empathically, and, thereby, more intelligently and capaciously.

Michael S. Roth is president of Wesleyan University. A paperback edition of his Safe Enough Spaces: A Pragmatist’s Approach to Inclusion, Free Speech and Political Correctness will be published this fall.

Gods of the Upper Air: How a Circle of Renegade Anthropologists Reinvented Race, Sex, and Gender in the Twentieth Century 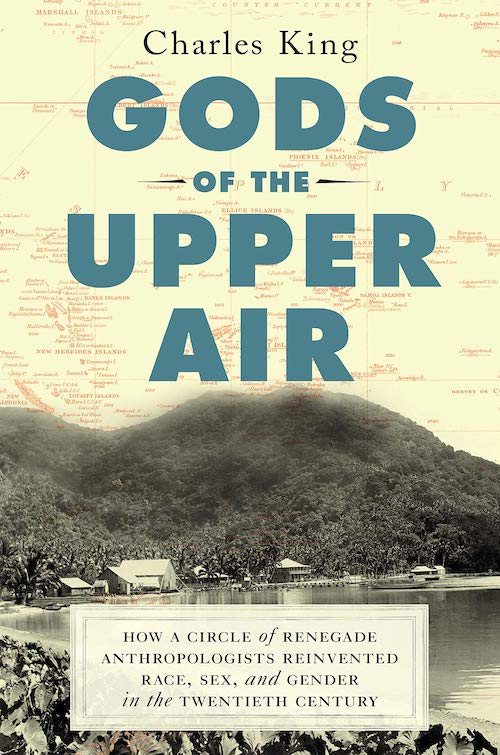