CAROLINA DE ROBERTIS’S third and most recent novel of historical fiction, The Gods of Tango, is a bold and mesmerizing meditation on the immigrant experience before World War I in Argentina, the emerging musical form of the tango, and a protagonist’s transition from female to male. Woven of many strands, the novel is absorbing, tightly crafted, and ultimately quite moving.

The novel begins in the year 1913 with Leda, a 17-year-old woman from a small Italian village near Naples, as she disembarks on a steamship to join her new husband, Dante. He has been living in Buenos Aires for over a year, and she has recently wed him by proxy in Italy. Leda has wanderlust in her soul and longs to leave her village, especially after her sister-cousin Cora dies. When Cora’s brother Dante announces his plans to travel to the New World, Leda offers herself up to him as his wife. He accepts and promises to send for her.

On the eve of her departure, Leda’s father presents her with a violin as a wedding gift. Passed on through the ages, the violin is said to have once belonged to the king of Naples. The instrument has always captivated Leda, but because women’s hands must be used for cooking, darning, and other chores, she has never been taught to play it. She accepts the violin from her father and stores it in her trunk for safekeeping during the passage on the ship.

When Leda arrives at the docks in Buenos Aires, Dante does not meet her. Instead, a coworker comes and informs her that Dante is dead. Leda must find a way to survive in this new country. It is a lively, gritty city inhabited by poor immigrants — a world where men outnumber women and the latter dare not brave the streets alone.

At first, Leda attempts to earn a living by taking on sewing with Dante’s friends at the conventillo, the tenement where he had lived and where his friends temporarily shelter her. But she cannot provide for herself by sewing and seeks other means of sustenance. While faced with that challenge, Leda hears the music that flows through the conventillos. It is the new music of tango.

Like the streets, this new music is the province of men. Only men play it, often in cabarets and brothels that are off-limits to Leda, a “good girl,” and a virginal widow. Leda can only enjoy the tango in partnered dancing in the courtyards of the tenements where she lives. She longs, though, to be part of the music and play it herself. Undaunted, she observes and finds an expert violinist, a blind man whom she begs to teach her. Despite his initial refusals, he does instruct her and recognizes her innate talent.

With her violin in hand, Leda leaves the conventillo, binds her breasts, cuts off her hair, dons Dante’s clothes, and assumes his name. As Dante, she easily finds work in a tobacco factory, earning significantly more than working as a seamstress. At night she searches for the tango in the cabarets. As Dante, she can enter these previously forbidden spaces. They are often violent, unruly places where men cavort with sex workers, and both men and women barely escape harm. When such a tragedy fells a violinist, Dante asks to take his place. Thus begins her musical journey in the world of tango.

De Robertis expertly evokes this sepia-toned period with its vivid, if sometimes foul, smells and textures — elements she displayed with aplomb in her previous fiction, particularly Invisible Mountain. This new novel is a familiar bittersweet immigrant story — discovering a new world, aching to eke out a better life while longing for loved ones and villages left behind. De Robertis writes:

With every immigrant she passed, she longed to stop and stare into his or her face and ask with nothing but her gaze And you? What are you here for? Why did you come?, as though just looking at them might unlatch the trapdoors to their hidden stories. And the stories would be infinite, no two alike, burning with hope and loss and vigorous despair, told in more dialects than even God could possibly speak, and yet, she suddenly saw, it was possible that somewhere beneath the surface all their hidden stories held the same thread, a single hum of longing, I came to live.

She wanted it always, every bit of it, the blistered fingers and sore feet and arms aching from holding up that damn blessed violin, the long endless chain of nights performing until the sun came up as if only their music could make the light return. Her new orquesta’s sound tightened over the months, fusing into a shape that could curl and soar and sting.

If De Robertis had stopped there, if she had only delivered an immigrant story involving the birth of a new music and its budding musician, the novel might still have triumphed. Her passages hum in step with the tempos of tango, seducing the reader to continue turning the pages. But where the novel is most striking and takes its most risks is in De Robertis’s treatment of gender identity.

Cross-dressing is not a new theme in literature. Shakespeare’s Portia in The Merchant of Venice and Viola in Twelfth Night are but two examples of females who assume male roles. Mulan, of Disney fame, who enlists in the army in her father’s stead, is said to have originated from an ancient Chinese song. And, more recently, Isaac Bashevis Singer wrote “Yentl the Yeshiva Boy,” a short story about a young girl who pursued Talmudic studies by living as a man. De Robertis shares much in common with these stories, including the tension over whether the protagonist will be found out. In Dante’s case, the consequences of revelation might mean sexual assault or death.

But De Robertis goes further than these stories, not only by inhabiting Dante as she experiences herself in her dead husband’s clothes, but also by leading readers into the bedroom. Whereas Bashevis Singer glosses over the wedding night between Yentl and her new bride, De Robertis opens the door to the bedroom and lingers. The sexual scenes are joyful, celebratory, and real.

Such writing is vitally important. We need Dante’s story and others like it, historical fictions and contemporary stories including literature by trans people themselves, that break open and shed light on the infinite varieties of humanness and the full range of gender expression and sexual orientation. Individuals like Leda-Dante have always existed, but they have not always been seen. De Robertis writes about Leda’s wonderment over the fact that no one discovers her:

She wondered why no one saw through her disguise. Perhaps people could see only what they expected, what fit inside their vision, as if human vision came in precut shapes more narrow than the world itself, and this allowed her to hide in plain sight.

Today, people whose gender identities don’t conform to rigid prescriptions still face grave dangers. Yet, we live in a paradoxical era — a time when Laverne Cox, a transgender woman, has been celebrated on the cover of Time and the White House has hired its first transgender staffer, but also a time of continued violent and deadly attacks against members of the transgender community, particularly trans people of color. The Gods of Tango is a book of historical fiction that has lessons for our contemporary times about stripping away the rigid notions of binary gender and allowing people to live freely with all their magnificent differences. The Gods of Tango opens up the imagination and creates spaces for characters like Dante to inhabit, allowing the possibility for people with non-traditional gender identities to thrive and create beautiful music of their own choosing.

Sara Campos is a lawyer and a writer living in Berkeley.

The Gods of Tango 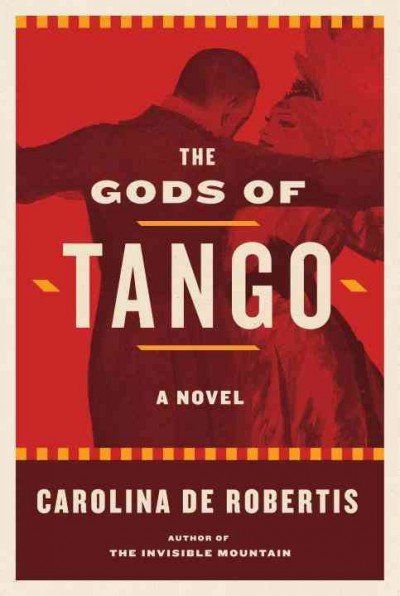