FOR AS LONG as I have lived in Greece, I have been confused — not just lightly confused, but deeply, irrevocably, pathologically confused. I’m not the only one. Everyone is. How is it possible, you might say, that an entire nation is befuddled? John Berryman, the American poet, wrote, “Ever to confess you’re bored means you have no Inner Resources. I conclude now I have no inner resources, because I am heavy bored […]” Well, we Greeks are heavy confused.

Following the exceptionally confusing referendum, the nation stands divided, families are torn by conflict, and a generation that thought of itself as European (and knows no other identity) may soon find itself back in the Balkans. We are confused about how a beautiful, proud nation can now find itself so horribly and publicly humiliated, and the only thing we know is that no one knows anything. The current economic crisis and the last few weeks of failed diplomacy, Greek showmanship, and North European bitchiness has simply reinforced this madness and raised it to new historic levels.

The average citizen in Greece is exhausted. The riots have given way to a full-blown national melancholia. Ten thousand suicides within a few years, mentally sound and educated people now living homeless because they lost a job, an economic collapse more severe than the United States’s Great Depression.

Allow me to introduce some color. The original socialist party founded by firebrand Andreas Papandreou in the 1980s (the root of half the current crisis) had a green logo and flag. In fact, it was a bright green rising sun. I remember the election rallies, hundreds of thousands filling the streets from Vassilis Sophias Street all the way down Alexandras Avenue and spilling into the Field of Mars. Smoke billowed from hand-held fireworks, rockets went off, a sea of Green flags moved like waves — the masses howling with glee every time he slammed his fist on the podium. Election shacks were set alight; the crowds shook buses and cars, leaned on foghorns and drove through the mad streets blasting music, throwing confetti, throwing anything at all. Everyone felt HUGE, and yet somehow, very confusing. After that the smurfs arrived. The New Democracy party took over with their waving blue flags,,led by Mitsotakis, another baggy suit banging the podium and promising us our day had arrived.

Then there was Kostas Simitis, prime minister in the mid-’90s (back to green), his image plastered on giant billboards, grinning like the Cheshire cat and holding up a euro note. That banknote, we were told, was our ticket to legitimacy. Our inferiority/superiority complex was finally going to be over, we were going to feel normal in Europe, we were going to have Olympics and wifi and new highways and new TV channels and new cars that made us feel German and new telephones and new lives! How all that was supposed to happen was not very interesting to us, it was actually a little … confusing. We bought that story and swallowed it whole. We invented the Olympics so it made sense to take them back. We didn’t want unpasteurized milk in bottles with cream on top, we wanted Dannon! Give us French yoghurt, give us Danish butter, give us Audis and Samsung televisions and tickets to Samoa. Screw Santorini! Well we got those things and paid an enormous price. Our salaries dove and our taxes went up and the “real Europeans” vacationing in Greece still looked at us like we were extras from the film version of Zorba the Greek, and still, we were confused.

Greece voted Syriza into power out of full-blown frustration with austerity — death by taxation (the New Democracy party’s chosen method). What is now bafflingly absurd is that they had no real plan. Wild populist promises about marching up to Angela Merkel and telling her to wipe out the debt, about addressing unemployment, creating jobs and minimum wages were all based on demagoguery. Tsipras and his ministers flew to Berlin and were ridiculed by seasoned diplomats who dismissed them as a ragtag bunch of amateurs. After five months of wasted time and spectacular diplomatic failures, Tspiras’s latest wild card was to call a general referendum which ended with a resounding NO. The question though, was never clear: a referendum on what? A no vote to what? So the Greek people, the majority of them young, voted on a memorandum that no longer exists. The deal expired when Syriza walked away from the negotiations to give a mandate to a government which was already elected and therefore already had a mandate? Is anyone confused? What about the last five months of failed talks? Will it be better now that we have kicked the bear in the shins? Ironically, the fate of Greece is now in the hands of the ECB more than ever before. The last 48 hours have been dramatic. Tsipras, in a bewildering volte face of epic proportions, took his NO mandate and requested another bailout package with the same, if not worse, austerity clauses he has railed against for five months. The entire world is scratching its head in bewilderment. The question now is whether or not there is enough trust left between Europe and Greece for this to even be accepted, and whether Tsipras’s days in politics are numbered.

What comes next? No one knows. When the initial high of the No vote wears off for those who voted no, and the despair hardens to resignation for those who voted Yes, Greece will once again be where it was: Bankrupt. Unless Syriza figures out a magic trick to open the banks, and people feel a return toward some sense of normalcy, this will all have been yet another brutal gamble with the lives of poor people. It is easy for me to romanticize Greece, find metaphors to explain its complexity, write poems about the islands, and address the insanity with humor from a distance. But right now people are suffering, and the place I call home is filled with divisiveness. Good friends no longer speak, families have been torn apart by disagreement and marriages broken in arguments over money, or over YES or NO. A generation of millennials are turning against their parents whom they see as frightened, cautious, and brainwashed. But from their parents view (whose pensions they live off) the young have not seen a civil war, a dictatorship, a Nazi occupation — many have never even seen a Drachma. As the lines at empty ATMs grow longer and the tiny pensions dwindle, tensions rise by the minute. Sadly, everything is opinion and conjecture, including what I’ve written here.

It remains to be seen if the great egos of Europe can work with the tiny fury that is Greece. What we need right now, more than anything, is to be kind to one another.

In 1939, on the eve of World War II, the great English poet Wystan Auden wrote the poem, “September 1, 1939.” Greece is not on the precipice of war, at least not yet, but Auden’s poem, full of anxiety at the madness of great powers and human folly, is as pertinent today as the moment in which it was written. His last two stanzas read:

All I have is a voice
To undo the folded lie,
The romantic lie in the brain
Of the sensual man-in-the-street
And the lie of Authority
Whose buildings grope the sky:
There is no such thing as the State
And no one exists alone;
Hunger allows no choice
To the citizen or the police;
We must love one another or die.

Defenseless under the night
Our world in stupor lies;
Yet, dotted everywhere,
Ironic points of light
Flash out wherever the Just
Exchange their messages:
May I, composed like them
Of Eros and of dust,
Beleaguered by the same
Negation and despair,
Show an affirming flame. 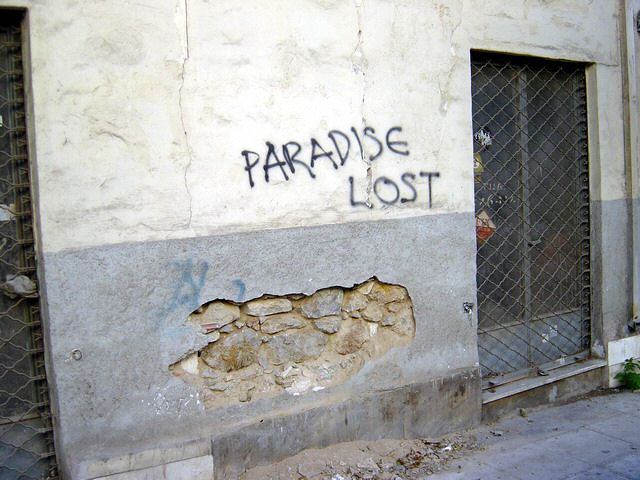 “All I Have Is a Voice”: On Greece’s National Confusion