IN HIS CONTRIBUTION to “A Symposium of Poets,” published half a century ago in the South Dakota Review, X. J. Kennedy concedes his “reactionary position” as a poet and then clarifies things: “I work mostly these days in rime and meter, and more and more feel truth in the old jazz song: ‘it don’t mean a thing if it ain’t got that swing.’” Aficionados will recognize the allusion to Duke Ellington’s barn-burner from 1931, a year or two before swing — the word, the music — became all the rage. The Oxford English Dictionary cites Ellington’s title and defines swing in words appropriate to Kennedy’s practice as a poet: “a flowing but strongly compelling rhythm.” An unapologetic formalist and swinger, Kennedy turns 88 later this year and straddles, as always, the uncertain boundary between light verse and — well, poetry. Take “How It Happens” from his latest collection, That Swing: Poems, 2008–2016:

Yes, poems can write themselves — that happens when
The poet feels picked up, used like a pen.
In my whole life that’s happened — when? ten times?
Far oftener, a poem suggests its rhymes,
Grants me a word with which a word might mate,
A seed to plant and carefully cultivate.
Hard work runs head-first up against resistance,
For who can will a poem into existence?
You have to wait with patience and believe,
Camp by your keyboard, ready to receive,
Letting no option prematurely shut.
The moral may well be Sit on your butt.

The poem, playing out in self-referential couplets, amounts to an insider’s how-to manual of poetic composition. Even the Muse is given her due, anonymously. Kennedy suggests that the constraints posed by formal verse — meter, rhyme — don’t blunt the poet’s wit, as many vers librists assume, but goad it and hone it. The suggestiveness of rhyme contributes to a species of spontaneity. In Kennedy’s hands, rhyme is almost sexual: “Grant me a word with which a word might mate, / A seed to plant and carefully cultivate.”

Born Joseph Charles Kennedy, the poet assumed his anonymous-sounding pseudonym to distinguish himself from the former president’s father. He published his first collection, Nude Descending a Staircase, in 1961, and since then has come out with more than 25 books of poetry for adults and children, as well as textbooks and translations from the French. Kennedy might be described as a resolute writer of light verse, but he shouldn’t be confused with fly-weight scribblers like Edward Lear or Richard Armour. His poems teeter cunningly between serious and playful, heavy and light, and upset the expectations of strict poetic taxonomists. As Auden puts it in “Letter to Lord Byron,” “Light verse, poor girl, is under a sad weather. / […] She’s treated as démodé altogether.” Kennedy’s standing as a poet recalls the late Thomas Berger’s as a novelist. Berger, the author of some of the funniest novels in the language, always denied being a comic writer, because, in our culture, humor is regarded as suspiciously frivolous. But consider the serious humor of Kennedy’s “Lonesome George,” devoted to a giant tortoise, the last of its species, kept in a pen at the Charles Darwin Research Station in the Galápagos Islands:

No mate for him exists.

Last one of his subspecies,

in turning into feces

Straining to gulp a fly,

he slumps on his kneecaps, his tail

For a long moment we bind

we holdouts of our kind,

Is this funny? An old poet communes with an older and equally doomed creature. There’s nothing ha-ha funny about it, but the premise is worthy of Buster Keaton. Kennedy has found a fitting emblem for his career as a poet, and hints at a deeper connection. In The Bestiary, or Procession of Orpheus (2011), his translation from the French of Apollinaire’s animal poems, Kennedy forges a poetic link in “Tortoise”: “Beasts go by in time to my songs, / To the sound of my tortoise’s pace.” In his note to the poem, Kennedy tells us “the first poet’s lyre, given him by Mercury, was said to have been fashioned from a tortoise’s shell.” The poet finds analogues to verse and song even among extinct reptiles.

Lonesome George, like his author, persists in doing what he does best, and without self-pity. Humor has many timbres and tones, and Kennedy plays with most of them, from the scatological to rarefied wit. Has anyone before him rhymed “subspecies” and “feces”? Kennedy’s gift for concision is a marvel (the meeting of poet and tortoise could easily be a fleshed-out essay or story, and much would be lost), as is the way he bends and shapes his basic iambic trimeter line. In a note to the poem, Kennedy, who visited George in 2011, delivers the punch line: “In June 2012, a few days after this poem appeared in a magazine, George died, leaving no progeny.” Light verse isn’t always a laughing matter.

Typical of Kennedy’s versatility and willingness to defy poetic expectations is the way “Versions,” the third section of That Swing, is followed immediately by “Diversions.” The former consists of his reworkings of eight poems by seven French poets. Kennedy’s versions are far from literal but do no dishonor to the originals. None, in the French, is light verse. In fact, Robert Desnos’s “Last Poem” was written to his wife and, legend has it, was found on his body in Theresienstadt, a Nazi concentration camp in Czechoslovakia. Desnos died there of typhoid in June 1945. Best of the French adaptations is “Sea Breeze,” Kennedy’s version of Stéphane Mallarmé’s “Brise Marine,” in which he renders the concluding line, “Mais, ô mon coeur, entends le chant des matelots!”, as “But oh, hear the songs the sailors sing you, heart!” Kennedy maintains Mallarmé’s rhyme scheme and never stops singing.

The four poems in the next section, “Diversions,” are straight-ahead light verse. When it comes to subject matter, light verse is a goat-like omnivore, consuming anything in its path. Nothing is too low-brow or highfalutin. “Riposte” recounts an encounter with an aging prostitute (“Mole-cheeked, unnatural blonde of sixty-five”) in a Nebraska motel that probably never took place (“from mortal sin redeemed”). In “Disabled Music,” Kennedy describes a broken clock that produces birdcalls at the wrong hours, and slips in a nice tribute to the poetic arts: “Who’d not respect / A song delivered in adversity?” “On a Young Man’s Remaining an Undergraduate for Twelve Years” is a blunt satire of the academy: “After conducting an investigation, / Two deans resigned, to do just what he did. / They couldn’t fault his ratiocination.” I’m fairly certain the germ of that poem was the investigation/ratiocination rhyme, rather than disgust with the state of higher education. The “Diversions” section closes with “Cold Beer at the Paul Revere Capture Site,” Kennedy’s celebration of Dr. Samuel Prescott, the sole midnight rider to reach Concord and warn the colonists of the approaching British army. This poem, too, is about poetry. After all, we know Revere’s name and not Prescott’s because of “Paul Revere’s Ride.” As Kennedy puts it, with a nod to Ella Fitzgerald: “Longfellow didn’t write, of course, ‘A tisket, / A tasket—listen up, kids, and you’ll hear / Of the midnight ride of Doctor Samuel Prescott.’”

If That Swing has a unifying theme, apart from sheer linguistic exuberance, it may be the imminence of mortality, long a Kennedy concern. His first collection, published 56 years ago, included a poem titled “On a Child Who Lived One Minute,” in which he rejects the “Lycidas” impulse: “Oh, let us do away with elegiac / Drivel! How can restore a thing so brittle, / So new in any jingle?” Death is the big cheat, the con job. The first poem in That Swing is “Lonesome George.” The last is “At Eighty”:

We go on drawing close as we resist
The sneak attacks of wily wear and tear.
Feeling each day reducing us to grist
For doctors’ mills, mere grain for Medicare.

Comrades in dissolution, we behold
The hesitant sunlight ray by ray advance
And lashes of hard rain and sharp-toothed cold
Wreak havoc on our newly planted plants.

But isn’t there a sweetness in this sense
That moments count for more, now that we strive
To drag our heels downhill while mending rents.
Finding content in waking still alive?
Lord, may our progress fall prey to correction
As we keep heading down by indirection.

Kennedy plays on the old bromide about youth being wasted on the young. Unlike his youthful self, the octogenarian poet seems to have reached a rapprochement with death, an acceptance of our mortal state. In the lines “But isn’t there a sweetness in this sense / That moments count for more,” we hear not Pollyanna but Montaigne. Is this light verse? 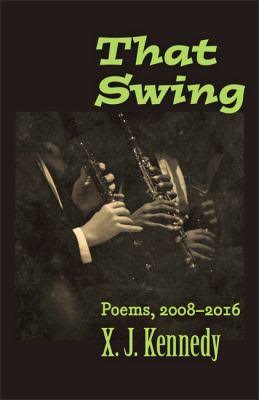