ONE OF THE DEFINING FEATURES of Trump’s presidency is his use of executive power to further his own interests, and the consequent feeling of helplessness among those who oppose him. Trump’s career was based on his ability to sell his brand, and therefore himself, an ability that did not end when he gained the platform of US president. He has used his businesses to bypass government restrictions designed for human rather than corporate entities, one such example being the Washington, DC, Trump Hotel, where embassies from Bahrain, Kuwait, and Azerbaijan pay to host events and the Saudi government is estimated to have spent nearly $270,000 on lodging. What effect these numbers hold to a businessman cannot be ignored when understanding Trump’s decisions in the Middle East, including his refusal to stand against Saudi Arabia’s crown prince Mohammed bin Salman for the murder of Washington Post journalist Jamal Khashoggi.

Broad immunity protections mean the president elected to represent the people’s interests has been placed in the position to best protect his own. Nothing other than privilege can describe such an ability, a privilege Joseph N. Abraham’s illuminating new book Kings, Conquerors, Psychopaths: From Alexander to Hitler to the Corporation traces back to the foundations of the nation-state. The Latin definition for “privilege” means “private law,” and what this means is: “There is a public law for commoners and a different, private law — or no law at all — for the king and his circle.” L’état, c’est moi did not begin with Louis XIV, and it continues to live on today within the shell of Western democracies.

Abraham reviews the historical precedent for accepting corruption and violence from our authorities. Why do we excuse an act, unforgivable if committed by an ordinary citizen, if executed or ordered by a leader? Kings, Conquerors, Psychopaths argues that conquest is violence, and therefore, the conquerors responsible for such heinous acts of violence are the same ones who designed the civilizations in which we live. Through the perspective of an evolutionary biologist and physician, Abraham reveals how such authoritarian violence has evolved into its modern form. While US society recognized a need to end authoritarian leadership, we did not understand the lasting effect of those leaders’ values on our society, including in our encouragement of intellectual and economic competitiveness. In a time when economic and political conquest largely replaces military expedition, the corporation has come to personify the authoritarian.

Abraham provides details on the human consequences we often dismiss when we discuss times of conquest and war. In the prologue, he writes in the second person and asks the readers to imagine partaking in a massacre. It walks us through horrific acts, such as hacking people to death with a meat cleaver, and tells us to picture enjoying this task. He then informs us this unthinkable scene was not imaginary at all, but executed by US forces at Son My Lai in Vietnam. This juxtaposition between the incomprehensible and the actualized reappears throughout the text.

He compares the similarities between leaders like Alexander the Great of Macedon and Queen Victoria against the more notorious, like Adolf Hitler, highlighting the influence of the perpetrator’s position in its translation to popular acclaim or disgust. In one striking example, Abraham compares Ashoka, third-century BCE king of India, to the New Mexico serial killer David Parker Ray, also known as “The Toy Box Killer.” The king would punish citizens in what was called Ashoka’s Hell, sometimes pouring molten lava down their throats or holding them onto a burning floor where they were then chopped apart. Such tortures resembled what Ray did to runaways in his trailer, revealing an unsettling resemblance between a serial killer and a king best known for his spread of Buddhism.

After comparing the violence committed by kings, conquerors, and psychopaths, Abraham shifts to a more diagnostic lens and analyzes the behaviors he believes to be embedded within such authoritarian violence. A confluence of psychopathy, narcissism, and Machiavellianism — manipulation with a long-term strategy — constitutes what experts call “the dark triad,” the three disorders conquerors possess. Abraham emphasizes the circumstantial, and therefore slippery, nature of such disorders, drawing from examples such as the Stanford Prison Experiment to highlight why we need to be cautious of such traits in ourselves as much as in our leaders — because the American corporate environment promotes the dark triad, and even encourages it among individuals driven to succeed.

This is where matters turn to the sociological. Abraham argues that only the government has the power to compel the corporation to sacrifice short-term profits for society’s long-term mutual interests. But when corporate and state aims become conflated, the way is cleared for the authoritarian personality. Who is at fault? A general population that does not take the time to understand a problem and elects candidates in a semi-panic. “I alone can fix it,” said Trump in Cleveland. Because of the large wealth gap in the United States, those at the top have been able to neutralize dissent through provocation, a tactic employed almost daily by a president who relishes in hateful rhetoric. When outrage dominates the dialogue, discussions on how to address the issues remain untouched.

It is not enough to complain, Abraham says. We must reassert our power as people. He acknowledges that his suggested response — to include, be patient, and listen — while simple in concept, proves difficult in application. He argues that we should learn from the psychiatrists and psychologists trained to recognize and treat the authoritarian personality so we may understand how to heal those who abide by it.

While much of Abraham’s distinct perspective derives from his background as an evolutionary biologist, at times he oversteps the boundaries. In an attempt to emphasize the present-day impact of historical violence, he describes an experiment that analyzed the behaviors of Caucasian, African-American, and Asian children. The strange conclusion he draws from the experiment — which found Asian children to be the most docile, and African-American children the least — was to look at “what horrors were perpetrated against children across ancient Eurasia in order to breed the quieter children we see today.” Similar problematic conjectures also appear in Abraham’s analysis of class, as he defines both the upper and lowermost classes by their “anti-work” ethic. He terms both leisure classes, a description which not only undermines the institutional factors affecting many in the lower class’s ability to work, but also ignores the work demanded in these individuals’ maintenance of daily life.

Abraham should also have acknowledged the steps taken against the authoritarian leadership he describes. For example, when describing the lack of response to sexual misconduct committed by those in power, Abraham has little to say about the #MeToo movement. While such efforts have far from ended the discriminations they target, to recognize them could better encourage readers’ involvement rather than identifying the violence as a problem, but one we do not understand how to address.

Kings, Conquerors, Psychopaths: From Alexander to Hitler to the Corporation highlights the historical precedent for leaders whose privilege has protected them from the consequences that should follow the horrors they commit. Abraham describes Queen Victoria, a mascot for his thesis, as the most vicious conqueror of all time because of her figurative leadership of Britain’s global colonial project. Because her position lacked a feedback loop, she was able to maintain her appearance as a dowdy matron while ruling around 35 million square kilometers and subjugating over 400 million people. Kings, Conquerors, Psychopaths asks us to recognize the violence committed by figures like Queen Victoria as a more pervasive violence, a type we have grown to accept and even support, both within our country and ourselves. To do so, we must turn the discussions inward and focus our energies on those who still possess a humanity we can reach. He reminds us, “If we do not work together to stop persecution of everyone, sooner or later all of us, each in turn, become the victims.”

Sam Risak is a short story writer and MFA/MA candidate at Chapman University.

From Alexander to Hitler to the Corporation 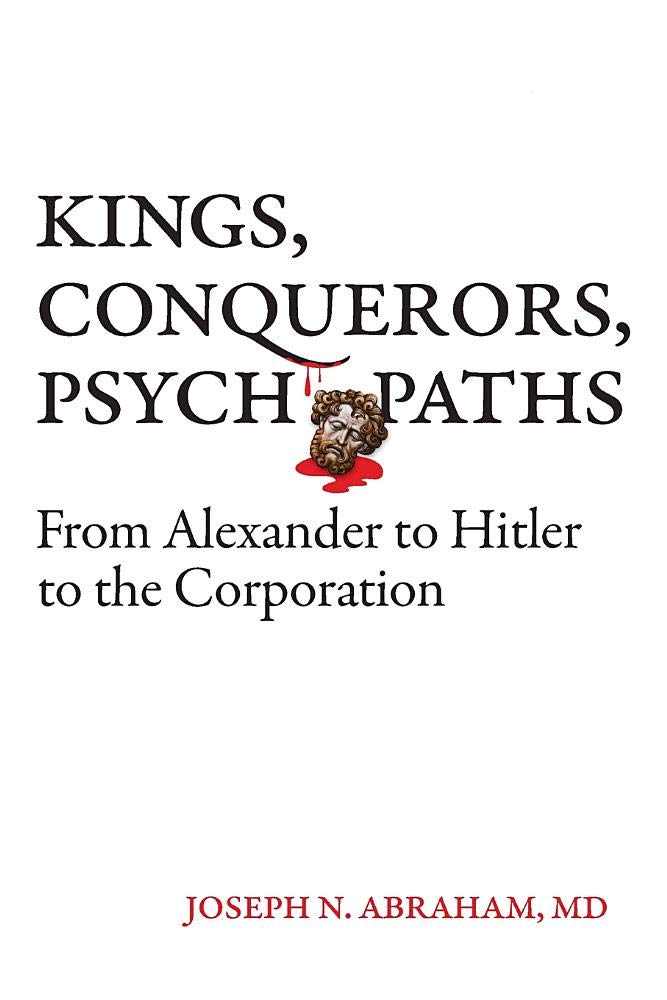