FOR THOSE ACQUAINTED with James E. B. Breslin’s penetrating 1993 biography of Mark Rothko, Annie Cohen-Solal’s new version of the artist’s life and achievements — conveyed in a mere 200 pages — can’t be much of a revelation. But as a slightly updated treatise on the life and achievements of the iconic Abstract Expressionist, it could well serve a new generation conditioned to briefer enlightenment.

Cohen-Solal’s book, Mark Rothko: Toward the Light in the Chapel, is published by Yale University Press as part of its “Jewish Lives” series, biographies of personages who’ve left their mark on the world, from Jesus to Groucho Marx.

To be fair, Cohen-Solal, a fervent researcher, has done her due diligence. A prize-winning French writer and academic, she has produced biographies of the Existentialist philosopher Jean-Paul Sartre and the celebrated art dealer Leo Castelli. But as a subject, Rothko is perhaps more challenging — a driven, angry depressive who regarded his paintings as sacrosanct revelations of his inner soul.

He was born in 1903 in Dvinsk (now known as Daugavpils), Latvia, at the time a shtetl in the Pale of Russia, where his father, Yacov Rotkovitch, was a respected pharmacist. A secular Jew, Yacov’s political outlook was pro-Marxist and “violently anti-religious,” according to his son. While he allowed his three older children non-religious schooling, though, for reasons that are not entirely clear, he pushed Marcus, his youngest, into six numbing years of Talmudic studies.

Spurred by the vicious pogroms launched against Jews in neighboring shtetls, by 1913 Yacov and his family had fled to Portland, Oregon, where relatives were established in business. Yacov’s death from colon cancer the next year was a blow which nevertheless seems to have liberated 11-year-old Marcus. After mourning his father daily for almost a year at the local synagogue, he vowed that he would never set foot there again. Still, although Rothko always denied that he was a religious artist, Cohen-Solal suggests that his deeply Jewish early experience played an important role in the genesis of his late art.

As he grew up, it became clear that he was not a good fit with the WASP United States, and he blamed his father. “I was never able to forgive his transplantation to a land where [I] never felt entirely at home,” he would say later. In the local public school, he saw himself scorned by his classmates as a Jew, a refugee with an accent, and the product of an underprivileged background. Still, his intellectual gifts won him a scholarship to Yale University. Here, too, he found himself a loser in Yale’s upper-crust milieu, and quit in his second year.

At 20, seeking “the dignity and excitement” of the arts, he gravitated to New York, where for a few years he rattled around from one lowly job to another, brooding and broke, unable to find a meaningful pursuit. The story goes that he turned toward art when he encountered a friend who was studying at the Art Students League. He signed up for classes, and by 1925 knew he had found his vocation.

So began Rothko’s long ascent to fame. Contemporary art was beginning to percolate in the New York in the late 1920s, and he joined the scrum of strivers — friends, competitors, enemies — who were painting their way toward recognition — among them Willem de Kooning, Robert Motherwell, and Adolph Gottlieb. Gradually, Rothko groped toward an artistic identity, producing suggestions of plant and insect life, mythological themes, and Surrealist-inspired dreamscapes before turning toward abstraction. At last, he made the breakthrough that brought him stardom, so to speak: the monumental late-stage paintings whose sole content was soft-edged rectangles and bands of numinous colors floating in space.

By the late 1940s, he was perceived as a major figure in the “new” painting known as Abstract Expressionism. Around that time, too, he finally became an American citizen, adjusting his name from Marcus Rothkowitz to Mark Rothko.

But if his art finally fulfilled his inner striving, his outer life was fraught with anxiety: two uneasy marriages (the second, longer one producing two children), deep quarrels with old friends, a bitter resentment toward emerging younger artists, festering dissatisfactions. In addition, he was concerned about keeping his art from Philistine eyes. “I have a deep sense of responsibility for the life my pictures will lead out in the art world,” he wrote to one museum director, refusing participation in a show.

The concern was famously exhibited in 1958 when he agreed to do a series of murals for the swank new restaurant, The Four Seasons, in the highly acclaimed new Seagram building on Park Avenue. Despite extensive preparatory work, Rothko returned the money advanced him, angrily declaring after viewing the site, “Anyone who will eat that kind of food for those kinds of prices will never look at a picture of mine.”

He envisioned a far different audience when what he considered his masterpiece was launched by the Houston art collectors John and Dominique de Menil. They arranged a collaboration with the architect Philip Johnson for a nondenominational chapel. Rothko ardently set to work in 1965, making plans to produce a series of paintings for installation in it. But, predictably, he rejected Johnson’s structural plans for illuminating the chapel, pushing for his canvases to be seen in the same light that prevailed at their conception in his studio. Working on the project for three years, he kept insisting that the design of the chapel must fit his own vision.

Eventually, a team of local architects took over, producing what Rothko wanted: an octagonal brick structure with a flat roof, which when finished became a meditational environment of 14 panels. His varied palette had given way to subdued, somber monochromes, creating a hushed but intense surround that continues to draw visitors, many in search of a spiritual experience.

But Rothko was never to see the finished project, nor to install the works himself. As he aged, and grew in artistic stature, his life fell apart. He drank heavily, neglected his health, and became mired in the depression that had always nagged at him. He separated from his second wife Mell, the mother of his two children, left their home, and holed up in his studio. Finally in February 1970, he committed suicide there in a dramatic staging that seemed to give full expression to his despair.

In a sorry footnote to this painful saga, it turned out that the friends Rothko had chosen to manage his estate had collaborated with the Marlborough Gallery in its illegal transactions with the huge stock of paintings Rothko had left. It took a lengthy, arduous lawsuit brought by his children to obtain a judgment that resolved the case in favor of the estate.

Annie Cohen-Solal, who shares in the Rothko worship that pervades the art world, where humongous prices for his canvases prevail, has credibly conveyed a wealth of material in the short space allotted her. What’s missing is a sense of critical engagement with the work itself. Still, if she hasn’t come up with much in the way of fresh insights, she’s produced a serviceable outline of his angst-ridden career. You might call the book “Rothko lite.”

Grace Glueck is a former art reporter and critic for The New York Times.

Toward the Light in the Chapel 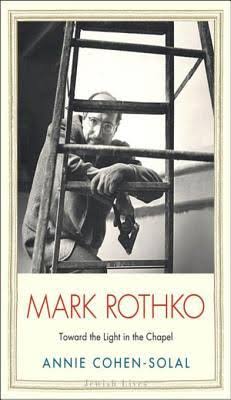