DIASPORA BOY is the work of an artist who aims to challenge the fundamental beliefs of the Jewish-American community, not least its at times slavish love for Israel. Cartoonist Eli Valley — who grew up in New York and New Jersey, the child of a rabbi and a social-worker-turned-lawyer — is unafraid to celebrate the noble tradition of secular Judaism while still despairing at what Zionism has become, and arguably has always been, in its repression of the Palestinians. In this lavishly produced book, Valley includes his own commentary alongside his comics, which are clearly inspired by the underground commix movement of the late 1960s and early 1970s and the iconoclastic Jewish-American cartoonist Art Spiegelman. Valley’s political framework is never far from the reader’s mind, but it is his art that is central to every page.

In his stinging introduction, Valley sets the tone for the book by dissecting the political merits of Jewish semen. He informs readers that he remembers “learning from my father at a young age — too young of an age — that all my sperm was precious because it contained enough cells to make up for all the lives lost in the Holocaust.” Valley was confused. “I marvelled not only at the science,” he writes, “but at my apparent powers — a single ejaculation carried six million? Or did he mean like a week of masturbation? This was before both Wikipedia and puberty so I just trusted it, along with the image I’d conjured; each of my sperm cells a tiny Anne Frank head with a furiously fibrillating tail.”

Valley’s witty and deeply insightful introduction describes growing up Jewish in the modern-day United States, a member of a once-persecuted but now strong community constantly told that it was under threat from racism, the degrading nature of diasporic life, and assimilation, and offered a solution to these problems in the supposed virtues of a vibrant Jewish state. The disconnect between the liberal values that most American Jews share and Israel’s increasingly authoritarian reality is a contradiction that Valley captures brilliantly.

Valley has created one of the most fascinating and darkly humorous books in living memory. His examination of Jewish life in the 21st century is profane and depressing, bleak yet hopeful. A proud Jew of the diaspora, he crafts detailed comics that reflect the schisms, hypocrisies, beauty, and strangeness of Judaism in an age of unparalleled power and influence. Witness Valley’s recent, biting comic about President Donald Trump’s belligerent, anti-immigration advisor Stephen Miller. But Valley has also condemned Barack Obama’s unwillingness to seriously question and challenge Israel’s occupation of the West Bank, or its expectation of unlimited American support.

Reading through Valley’s work, a reader may be struck with a key question: why aren’t these issues more prominently discussed in The New York Times, The Washington Post, or other mainstream newspapers? Even today, it’s exceedingly rare to read an opinion piece by a Palestinian or even hear a consistent, unedited Arab or anti-Zionist. Although Valley’s work has appeared in outlets such as The Forward, The New Republic, and The Nation, it remains rare for the Times to provide space for work that challenges Israel or US support for it. Valley’s work is important because the comics medium allows him to raise points that aren’t usually tackled in the mainstream press. Why are so many Jews chary of robust debates about these issues, Valley asks? “A ghetto mentality is afraid of widely-aired debate, because that might lead to a pogrom,” he argues. “We have the power of superheroes but we perceive ourselves as shlemiels. That, too, owes something to the hero/victim binary that demarcates much of Jewish self-perception today.”

I’d argue that that this apparent Jewish perception of weakness — and I say this as an atheist Jew who’s been living in Jerusalem for the past year-and-a-half — has been concocted for cynical political purposes by the most powerful Zionist groups. Nobody seriously believes that a nuclear-armed Israel is threatened by stone-throwing Palestinians. No one actually thinks that one of the most powerful militaries in the world is challenged by Hamas rockets. But fear-mongering is great for fundraising and tells a media and political class — often reinforcing this point with major campaign money — that Israel will be fatally weakened if it’s unfairly criticized in the media, challenged at the UN, or forced to give an inch to the murderous Palestinians.

Hence the necessity of Valley’s work. It’s hard to pick the best comics from this collection because so many of them take a sledgehammer to what Valley has called, in an interview with Haaretz, “the disconnect between our self-image and reality.” In his notes to a cartoon headlined, “Obama Menace Dress-up Doll,” Valley notes that during the 2008 US presidential campaign, many Jewish voters received a mass email that alleged the Democratic candidate was an extremist Muslim, jihadist, and anti-Semite. The comic itself is savage. Under an image of a Taliban foot soldier it reads, “Sure, he went to ‘Harvard,’ the ‘Harvard School of Jihad’ in Afghanistan! Are you ready for July 4 beheadings?” A Nazi uniform is accompanied by: “His father was from Kenya, where the word for ‘coconut’ is ‘Nazi.’ Case closed.” Finally, and you can feel Valley wanting to push the absurdity of anybody thinking that the potential US president is anything other than an African-American man, a KKK member is featured with the caption, “Okay, maybe this one’s a stretch. Still, his mom’s white, right?”

Another ferocious comic takes on the former head of the Anti-Defamation League (ADL), Abe Foxman. In his notes, Valley damns Foxman’s tenure at the organization, indicting “the anti-Arab and anti-Muslim bigotry, the McCarthyite tactics, the vilification of human rights groups [and] the embrace of extremists.” But he focuses the bulk of his scorn on Foxman’s denial of the Armenian genocide, a stance the ADL took because it calculated that Israel’s strategic relationship with Turkey was more important than recognition of a wronged people. “Abe Foxman had literally pitted the Jewish community against justice in an area where we were supposed to lead: fighting genocide and genocide denial,” Valley writes.

The cartoon depicts Foxman as a venal man shaming the Jewish community with his antics. Alongside the Armenian scandal Valley depicts Marc Rich, pardoned by President Bill Clinton thanks in part to Foxman’s lobbying. Rich had donated serious money to the ADL, and Foxman cared little about Rich’s history as an international fugitive trading with Iran during the hostage crisis. For Foxman and his ilk, fundraising, rubbing shoulders with power, and blindly defending the Jewish state were essential parts of the job. For anybody else with a shred of decency, Foxman was a woefully inadequate Jewish representative. Once again, the mainstream Jewish community allowed itself to be debased by a figure whose prime credentials were surviving the Holocaust and rigidly enforcing Zionist orthodoxy.

During the Israel conflict with Gaza in 2014, Valley drew one of his sharpest cartoons, one that got at the heart of Western racism against Palestinians. During this conflict, dubbed Operation Protective Edge, Israel had informed many Gazans by telephone and leaflet before bombing their homes, claiming that this was a humanitarian act. In reality, more than 2,100 Palestinians were killed, including at least 490 children. Valley’s cartoon wonders if the world and the Jewish community would have cared more about the devastation if Israel had dropped leaflets with a message that read, “Within 60 seconds, change your children’s names to something less, you know, Mohammedan.” The next panel shows a newsreader on TV saying, “In horrifying news from Gaza, 5 year old Cathy McMahon, 3 year old Jonah Williams, 7 year old Liz Cohen and 6 month old Danny Green died in an Israeli assault.” The cartoon speculates that if that were to happen, President Obama “would maybe, just maybe,” say this: “After consulting with Congress, we are suspending all military aid to Israel and instituting a blockade, effective immediately until the slaughter ends.”

The moral crisis within the Jewish community may seem like a luxury that occupied Palestinians shouldn’t need to indulge. They’d be justified, of course. Comfortable Jews in the United States aren’t living under military rule in the West Bank or Gaza. But changing minds in the Jewish world is vital for the health and future of a people who until recently would never have stayed silent in the face of state slaughter. Valley fits into a glorious Jewish tradition of dissent, and Diaspora Boy is a unique calling card for the strength and resilience of the secular, diaspora Jew.

Antony Loewenstein is an independent journalist and author of My Israel Question and Disaster Capitalism: Making A Killing Out Of Catastrophe.

Comics on Crisis in America and Israel 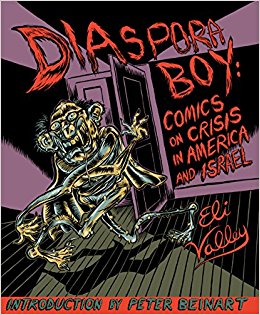